What are the Best Alternatives to Aura for Identity Theft Protection?

While Aura is by far the best service I’ve tested for identity theft protection out there, it’s not without highly competent competitors of its own that can give it a run for its money and offer up some neat features that Aura might not have, or doesn’t do as well. 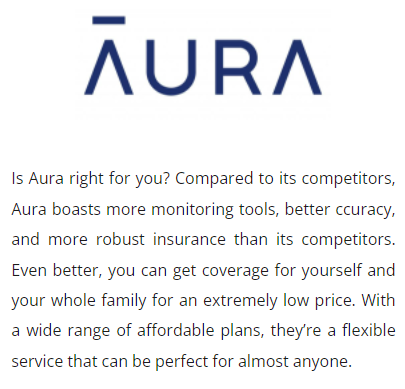 However, due to the sheer performance of the service, there aren’t very many I think present a compelling argument for why you should take them over Aura. As a result, I’ve trimmed the list of major competitors down to just two I think offer a comprehensive bonus in some circumstances over Aura.

LifeLock is an excellent, if flawed, identity theft protection service that matches Aura in many ways.

In terms of monitoring breadth it is roughly identical, offering the following options included in its highest tier plan:

This covers not only the most common circumstances, but a few that other services don’t offer, either because they may find them too niche, or because they are too cost intensive to employ.

Prime among these is home title insurance, which is a must have for any homeowner out there.

Home title fraud is one of the most common, and most consistently devastating types of identity fraud out there.

Essentially, the fraudster gets a hold of enough of your personal information, plus your home title, and does stuff like take out a second mortgage on your house, then pockets the money.

Without home title monitoring, most people don’t get a clue about this until they realize their mortgage has suddenly jumped up in price, and call the bank to get a run down. If they’re unlucky, or unwary enough, the jump could be relatively small and they don’t even realize it until they think they’ve hit the point they should have paid off their mortgage…and realize they still owe a ton of money.

Home title alerts can give you a head start on cutting off disasters like this before they become disasters rather than inconveniences.

LifeLock is one of the very few, select services on the market that offers identity theft protection, with Aura and its predecessor Identity Guard being another big example.

This alone sets it up as a worthy competitor to Aura, but there is one other thing that LifeLock has: its additional services.

Each LifeLock subscription also  comes with access to its Norton 360 security suite. In addition to a quite good antivirus program, and a fully featured (though limited in scope) VPN service, it also comes with a few “PC health” features that will help you keep your computer in good working condition without needing to download 3rd party programs.

Aura offers some of this as well, but it’s relatively subpar. The antivirus is okay, but not as good (understandable as Norton is specialized in antivirus and PC security programs in the first place), and its Wifi protection program is a very poor substitute for a VPN.

On the downside, LifeLock has significantly slower monitoring than Aura, which means you get less of an early warning that something has gone wrong. Its alerts are days slower, which means you could have lost a valuable head start in the fight to protect your identity.

Additionally, LifeLock is notably more expensive than Aura is. Some of this can be chalked up to the Norton 360 security suite, which if bought separately, would cost you a fair bit, but it’s something to note if you’re looking to save money and are fine with using the free versions of these features available from other companies like AVG.

Overall, while I think Aura is a better alternative in many ways to LifeLock, it offers enough performance and greater quality to its additional features that it’s easy to justify going with it over Aura.

At the opposite end of the spectrum is IDShield.

This is a much smaller service than Aura, but nevertheless provides some of the best performance on the market. While its monitoring breadth is lower than Aura or LifeLock, and it notably doesn’t offer either home title monitoring or 401(k) and investment monitoring, it offers everything else these other services do.

It’s one of the only services on the market that not only matches Aura for monitoring quality as well, it actually beats it in one major category: speed. Aura can usually get you alerts within 30 minutes to an hour of something happening, with the longest time I’ve seen between issue and alert being about 3 hours.

IDShield consistently gets alerts within seconds to minutes of something happening, and its monitoring instruments must be extremely sensitive to do so. Despite this, I’ve gotten no frivolous alerts or false positives from this service, as it provides equal accuracy to speed.

IDShield is also one of the only services to provide this functionality at a significantly lower price point to Aura, making it an extremely good budget option, and an absolute steal at its primary price, so long as you forego some optional features you can get for free from other services; you can downgrade IDShield’s credit monitoring for a significant savings and just use Credit Karma or something with no issue.

IDShield has an excellent price for individuals, but offers no particular discount for its family plans. Instead, you pay very nearly double the price of one plan for family coverage. This makes it much less desirable price-wise.

By contrast, Aura offers family plans that are not only a little bit more expensive than its individual plans, but which are actually very slightly cheaper than IDShield’s plans.

This means you can get coverage for multiple people, more flexibly (as Aura’s family plans can cover up to 10 fully-functional adult accounts under some circumstances), for a lower price…and higher performance to boot, as Aura offers those more advanced monitoring tools that IDShield lacks.

So, IDShield is an excellent option for anyone who only needs coverage for themselves, and isn’t a homeowner; as these two things often go hand in hand, this is a good mix.

However, for a lot of people Aura will not only be better, but cheaper since they’ll want to cover their spouse, children, and other family members in addition to themselves. Find out about Aura promo codes and coupons.

Still, I think it’s notable that IDShield has a service that is in some ways cheaper, and in some ways better than Aura, which is a rare sight to see.

While Aura is hands down worth it, the best and legit option out there right now, and trounces these two in several regards, there are some strong merits that can recommend either of these over it depending on your priorities. I’d suggest taking a look at both LifeLock and IDShield to see if maybe they fit your needs better than Aura before pulling the trigger, since there are always circumstances that can sometimes make the seemingly objectively best option worse for your specific life circumstances.

Read Our Comparison Articles With Aura: