IDShield is a very solid pick for identity theft protection, one of the only options I’ve looked at that can potentially match Identity Guard. While I’m still comfortable giving the edge to the latter, for a few reasons which will become apparent as we go on, there’s a solid chance you might see something you like in IDShield’s options that could endear it to you. 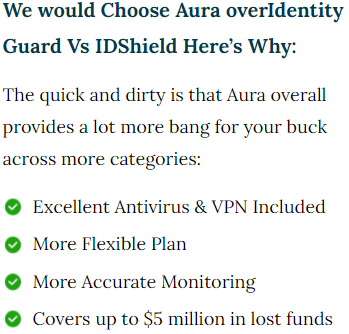 The quick and dirty is that Identity Guard overall provides a lot more bang for your buck across more categories, with:

This was surprising to me, as I’d got used to other services flat out missing the same alerts I was looking for, or taking forever to find them.

Identity Guard found the expected alerts instantly, and threw them up for me to look at in detail. IDShield did also, and actually gave me a little bit more information than Identity Guard did up front.

So in terms of speed and accuracy of monitoring, the two services are ENTIRELY equivalent, kudos to both of them

The main difference here is in what they monitor. IDShield has an impressive suite of monitoring options, looking at most of the main categories: deep web and dark web monitoring, high-risk transaction monitoring, bank account monitoring, and more. All of these things Identity Guard shares with it, along with stuff like 3 bureau credit monitoring.

The main difference here is that IDShield stops there. It doesn’t offer two of the key features you can get with Identity Guard Ultra: home title monitoring and 401(k) and investment monitoring.

This is forgivable in some ways, as IDShield is extremely affordable, but those two features are some of the biggest and most important out there if you’re a homeowner or someone who’s deeply into investing and saving up for retirement.

Essentially, in terms of monitoring accuracy, IDShield is as good as, or perhaps even slightly better than Identity Guard. In terms of breadth of monitoring, however, it falls a bit short.

This is where it gets interesting. Both of these options offer excellent threat resolution options. Aside from the $1 million in insurance which we’ll discuss more down below, both give you a few options to choose from. Both offer wallet protection, a relatively standard service that gives access to help in canceling and reordering credit cards, driver’s licenses, and similar lost items if you lose your wallet or it is stolen. In addition to this, they offer some different options.

Identity Guard offers easily available, late night customer support, as well as “white glove concierge” resolution services with their Ultra plan. This essentially means they have a team assigned to resolving issues that would normally crop up in the process of getting your identity back. These services mostly include limiting hassle by handling a lot of the scheduling and setup process necessary to get your identity back on track. It doesn’t quite automate the process or take it out of your hands, but streamlines it.

IDShield on the other hand does have a major flaw: their customer service is only open during limited hours, between 7 AM and 7 PM (Central) and only Monday through Friday. They do have an emergency line available any time, but service will be limited.

However, what they offer that Identity Guard doesn’t is investigation services. There are private investigators contracted to IDShield specifically, who can try to figure out problems that have no clear answer; things like your credit score suddenly dropping for no reason.

This is an excellent tool to have, and makes declaring a winner impossible.

Essentially, IDShield is better at diagnosing problems, while Identity Guard is better at…making them go away, basically.

It’s a similar story to other products. While both offer $1 million in coverage, Identity Guard is significantly more transparent about what all it applies to, and offers more flexible coverage.

It’s difficult to find details about what exactly IDShield’s insurance applies to. While it’s clear it covers lost wages and similar expenses, to what extent is unclear.

Identity Guard makes it easy to find these details, and it’s quite a generous policy to boot. Overall on transparency and ease of finding info alone, Identity Guard takes this round.

IDShield’s website isn’t bad at all. It’s relatively simplistic, but well laid out and pretty easy to navigate. It reminded me a bit, at first, of Zander’s website but has none of the major problems involved with that site, namely the loading times.

So while it’s not exactly a pretty site, it is more than functional.

Everything is available via a simple sidebar to the left, which has a number of collapsible tabs that lead everywhere you need to go.

It works well, and is easy to navigate for the most part, but some particular information is difficult or even impossible to find, primary among them being the details of the service’s insurance policy.

Compare it to Identity Guard’s dashboard.

Everything is easy to find, with a list of alerts scrunched onto one corner that can be navigated to so you can view it in more detail.

Identity Guard’s interface is cleaner by a long shot, though technically not any more easily navigable for most of the salient information.

I give the edge to Identity Guard almost entirely because of how much easier their pages are to access. Otherwise, while IDShield’s site isn’t much to look at, it does the job just as well.

This is less interesting, because the tie is for a very simple reason. Neither offers anything I’d consider an “additional service”. Both are extremely focused identity theft protection services which are very good at their job.

Every feature both services offer is turned to that bent. Identity Guard offers better monitoring and different threat resolution, but that would be the only thing I could throw in here.

This was a hard one to judge.

Identity Guard takes the lead largely due to available discounts. 40% off makes for a compelling argument as to why you should go for this service.

IDShield has an interesting pricing system. Both of its service plans have equivalent performance superior to Identity Guard’s Total plan, which is fairly lackluster. You can save a lot of money by just going with the 1 Bureau plan and using an outside service for credit monitoring, since it’s not really worth the extra $4 per month.

This makes the 1 bureau plan an astounding budget option, and far superior to Identity Guard Total. However, it pales in comparison to the options provided by the more expensive Identity Guard Ultra plan.

In the end, this came down to the family plan deals.

IDShield’s best coverage is less comprehensive than Identity Guard’s Ultra plan. Its family plan nevertheless costs more than the equivalent Ultra family plan, if only by a bit. This is despite offering significantly less.

It is worth noting that IDShield openly offers an interesting option: affordable business plans. This might make it tempting if you want more than personal or family household coverage.

Ultimately, Identity Guard takes it, but IDShield does offer an interesting “middle ticket” option for someone looking to save money. Its 1 bureau plan is dirt cheap, and compares well to all of the middle tier plans offered by competitors in terms of performance while being cheaper than most.

IDShield really surprised me several times over the course of my research. Given the layout of its website and dashboard, I initially expected it to be something closer to Zander or Experian’s IdentityWorks, which were, overall, kind of duds when it came to the identity theft services.

Instead, what I found was an exceptionally competent service that only falls short in some pretty minor ways.

While ultimately I think Identity Guard is better in a few key areas (monitoring breadth and insurance particularly), IDShield comes very close or matches it in most relevant options, and you could potentially find yourself thinking it’s the better option in specific circumstances.

Identity Guard’s Ultra plan is more cost efficient and effective overall for most people when it comes to protecting themselves and their family.

On the other hand, IDShield does manage to carve out a real niche in the market, being both better and cheaper than Identity Guard’s Total plan. IDShield also offers more affordable and easier to find business options, which is neat.

Ultimately, while Identity Guard takes the win off the strength of their Ultra plan’s monitoring, it was a much closer-run race than I would have expected  before starting research.