I won’t beat around the bush too much: I hate Allstate InfoArmor. It’s an insultingly bad service, and looks even worse when standing next to Aura protection reviews, which is pretty much the complete opposite.

Nevertheless, let’s do a deep dive and see how wide the gulf between these two can get. 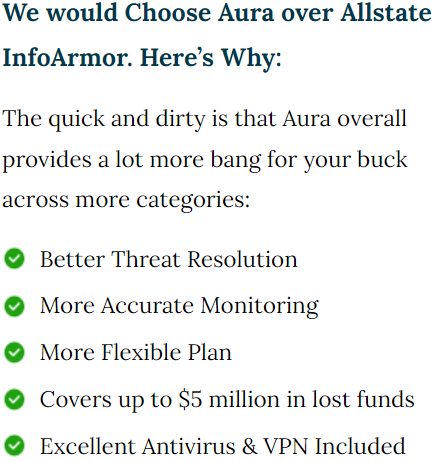 When it comes to testing a service, we believe the best way is by using it extensively, the same way a normal person would. So, our experts approach the process from a more grounded point of view, with no special treatment, and try to figure out how the service would work for the average user.

Over the course of about a month, we put each service through its paces and see how it performs in each of the six major categories:

Our testing involves making changes, and sometimes risks, that would provide alerts or shifts in the service’s monitoring systems, and seeing how fast the systems are, how much detail they give, whether they throw up false positives, and so on. We also do a small audit of how each service’s customer service responds to a potential threat and what actions they might take to resolve it.

These are the two most important factors involved in these services, and where the bulk of the final score for each product comes from. The grades in other categories, such as the value of the insurance, or what nice little extras the service might provide, are useful mostly to provide context about how services that perform similarly might have edges in other ways that make them a better deal.

Do You Even Need Identity Theft Protection?

A lot of people underestimate the importance of Identity theft protection, and that’s understandable. For a long time, identity theft was a pretty niche type of crime, and easily avoided.

However, a combination of many things has contributed to the meteoric rise in identity theft events. Prime among these is identity theft becoming easier due to new techniques outstripping security protocols, and internet use becoming more and more common for more than just entertainment.

With the confluence of these two things, identity theft is fast becoming one of the most common types of crime the average person is likely to encounter. Depending on where you live, identity theft might actually soon become, or already be, more common than muggings.

Having identity theft protection won’t necessarily stop your identity from being stolen, but it provides valuable early warning and the ability to follow up on threats and quickly repair any damage that has been done.

Having identity theft protection is something any responsible adult should at least look into, as having even basic protection will make your life, and that of your family, much easier.

Ease of Use: Winner – Aura

The main gripe I have with Aura is that somewhere between four and five of the options on the front page here are things you’ll use once and never need to activate again. So to get to any of the actually relevant information involved in your monitoring, you need to really dig into the tabs. Thankfully, these are easy to navigate, but it makes the site a little more annoying than it needs to be.

InfoArmor, on the other hand, is actively terrible.

The dashboard is what gets me every time. It has almost nothing on it, most of what it does offer is pretty much useless, and the one feature that is vaguely useful never loads up when you load the page, and usually just says it’s “unavailable”.

It may as well be a blank page.

As you might have guessed from the score guide, I have no kind things to say about Allstate InfoArmor here.

The main issue with Allstate’s monitoring is pretty simple. It doesn’t work. Period. Over the course of testing, despite it claiming to cover a number of monitoring types, it gave me zero alerts. There should have been at least seven, and up to ten alerts I expect to see immediately after booting up a new service. It typically depends on whether the service rolls a few different ones together or not. Aura does this, bundling a few breaches to the same site or the same account into one big alert.

This is fine, and Aura wins on its breadth of monitoring and accuracy, as it includes:

So, it would win regardless, as Allstate only claims to cover the first few of those anyway, but, of course…it doesn’t work at all!.

Ignoring the fact that Allstate cannot technically ever resolve a threat if they are incapable of detecting one, it still loses to Aura due to the latter having better customer support.

While both offer 24/7 customer service, Aura tends to have more experienced representatives, each having roughly 7 years of experience in the industry on average.

And, honestly, I am dinging Allstate a bit in this regard because I can’t justify giving a tie to a service that cannot ever reasonably deliver on the promises of their threat resolution team.

Continuing its trend of being subpar in every regard, Allstate InfoArmor not only has worse insurance than Aura, it has the worst insurance out of every other identity theft protection service we’ve reviewed.

Their best insurance plan offers $500, 000 in lost funds reimbursement and up to $1 million in expenses.

Aura’s lowest insurance plan offers $1 million for each kind of reimbursement (lost funds and expenses), and for those who go with the Ultra plan, they get the Executive insurance, which bumps it up to $5 million in lost funds reimbursement for each adult member on the plan.

Aura is better than almost its alternative on the market too, but it wouldn’t need to be to beat Allstate here.

Aura offers a Wifi security program, which is honestly not very good, and an antivirus program which is decent. Allstate offers links to certain forms you can fill out to reduce solicitations.

Neither is an amazing benefit, but an antivirus is something you’d need to pay for, while those forms can actually be found online for free, so Allstate merely makes it a bit more convenient.

So, Aura is the better value here.

While Aura comes out to be a bit more expensive in some ways, it’s not by much, and the extra performance it offers (even if that is a low bar in comparison to Allstate) more than makes up for it.

Allstate’s prices actually aren’t that bad in a vacuum.

This price structure is pretty close to what I’d expect from any smaller service. Aura has a more complex one:

At the most expensive end, you’re paying $6 more than Allstate InfoArmor. Given that Aura is a service that functions, and InfoArmor doesn’t, that’s a real steal.

Funnily enough, if you want family protection…Aura is actually cheaper by $3 a month.

Not only is that very silly on the face of it, it’s worse than it appears.  Aura’s family plan covers 10 people; up to 10 adults, or any combination of adults and children.

Allstate InfoArmor is a complete joke, so it’s no surprise that Aura wins this one. This is literally the best, in my opinion, identity theft protection service on the market going up against arguably the worst. It’s certainly by a wide margin the worst of over a dozen identity theft protection services I’ve taken an in-depth look at over the years. Save yourself the headache, skip Allstate InfoArmor, and go with Aura. Or, at least, anything else.