When it comes to identity theft protection, looking for budget options is always something you at least  want to consider. The higher profile services are often the best you can get, but depending on your own circumstances, they may actually be a bit overkill, in terms of both price and function.

Smaller, more cost-effective services are often quite a good pick for many people. This is a comparison between two of these types of service; sort of. I’ll get into more detail later on why one of these services may not be as cheap as it appears at first glance.

For most people it’s going to be Aura. 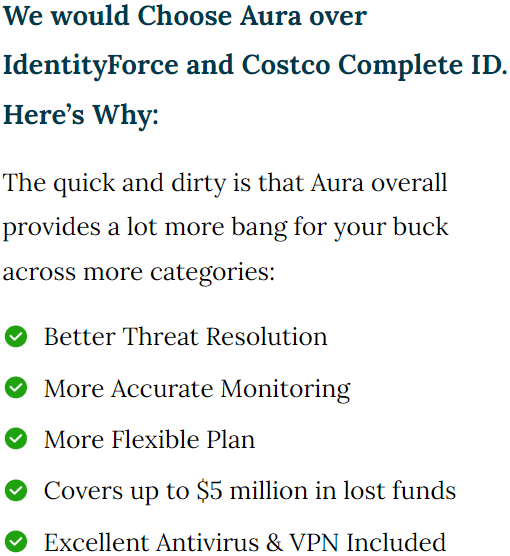 Ease of Use: Winner – IdentityForce

I’m not a big fan of either of these services when it comes to ease of use, but Identity Force edges out Costco’s Complete ID system here just a little bit.

Identity Force’s dashboard is miles better, and I quite like how it’s laid out.

It’s a bit cluttered, especially on the sides, but you get a lot of useful information up front.

My main issue in terms of user friendliness is Identity Force’s signup process…as well as their cancellation process.

Signing up takes an unnecessarily long amount of time, and it’s more complicated to do than anything else out there. Cancellation is likewise annoying as it can only be done via phone, and their customer service representatives are trained to be very persistent and even somewhat aggressive about retention. I’ve never had as much trouble canceling a service, nor been pestered so often after doing so.

Costco Complete ID is better in that regard, but in terms of the overall moment-to-moment workings of the site I find it falls short.

It’s a barren-looking page with a lot of unused space. This makes it more annoying to navigate than it needs to be, as using the service involves a lot of scrolling up and down the page to find the exact link you’re looking for.

Basically, once you’re into Identity Force, you should have a pretty good time using it. Costco will always be annoying, even if signing up is easier.

For a service of its size, Identity Force is a real powerhouse when it comes to monitoring. In terms of breadth, it rivals the big boys on the market in many ways, offering all of the core options you’d expect from a service like this:

This covers anything you’ll need in day to day life for most users. All Identity Force lacks are the very specialized (though often important) monitoring tools like home title monitoring, which is forgivable for a smaller service like this.

Complete ID, meanwhile, falls short in this regard. It covers about half the situations there, and misses out on some of the most important, like the advanced fraud monitoring features.

In terms of accuracy and speed, Complete ID also falls short of Identity Force, which is blindingly fast and offers a lot of detail. Its instruments are obviously pretty sensitive. Getting an alert from the Costco systems usually takes a bit longer, and it doesn’t always catch 100% of the things it’s supposed to get.

The one main thing Complete ID has going for it there is that its sex offender and criminal registry monitoring systems (billed as “neighborhood watch alerts”) are extremely detailed, which is a good feature if that is one of the alert types you’re most concerned about due to living in a high crime area.

Credit where it’s due, Costco Complete ID gets customer service all the way right. 24/7 access to customer support is one of the primary things an identity theft protection service should provide to its customers.

Identity Force offers more limited hours, being available from 8 AM to 5:30 PM (EST). While open 7 days a week, this does make them a bit harder to get in touch with if you get an alert in the middle of a workday and can’t deal with it immediately.

As neither offers other resolution services, unlike some of their competitors, this is a clear win for Costco here.

Identity Force has insurance of a quality similar to what I expect from the biggest names in the business: $1 million for reimbursement of lost funds and expenses, calculated separately. This can give you up to $2 million in coverage if your needs happen to extend that far.

Complete ID’s insurance isn’t bad actually, but it’s essentially half of what Identity Force offers. They give you $1 million in insurance, but expenses and lost funds are pooled together, so you never get to double dip.

This is impossible to call, as Identity Force offers very little in terms of additional services, and Complete ID has an N/A in this column for a reason, which we’ll get to later.

Suffice to say that Identity Force gives you access to some pre-filled forms that can help you cut down on solicitation from various companies, but not much else.

Complete ID is, arguably, an “additional service” rather than the main course. This is, obviously, an odd situation.

If Identity Force had more going for it, I’d give it the win, but as-is it’s not a win or loss for either.

Here’s where we sort of get down to the nitty gritty of what makes Costco Complete ID a bit of a headache to review, and separate from that, in my opinion one of the worst deals on the market if we’re talking purely about how much it would cost to gain access to their identity theft protection.

At first glance, their prices are extremely reasonable.

$13.99 a month is what I’d expect to pay for a service with its level of utility, though it may be a bit overpriced compared to a few notable low budget competitors that offer better service. Still, it’s not bad. $8.99 per month is an excellent price, and very hard to beat for what you get.

If these were the actual prices, this would be a different discussion and Complete ID would be the winner in this category.

Unfortunately, they are not, due to one simple fact: Costco Complete ID is only available to Costco members. This means you’re tacking on an extra $60 (for Business and Gold Star members) or $120 (for Executive members) onto the base price here to gain access to this service. That’s $227.88 per year for both services, or the equivalent of about $18.99 per month, with either $60 or $120 being owed up front, as Costco memberships are on a yearly basis only.

That is quite a bit less of a deal for what Costco Complete ID offers, especially compared to Identity Force.

The problem with Identity Force’s more expensive plan is that “+Credit” part. You’re paying an extra $6 a month for credit monitoring.

This is ludicrous. For one, that is all you’re paying for; it adds no other new capabilities. And two, you can get credit monitoring of the same or better quality for free from services like Credit Karma.

Essentially, there’s no reason to even mention Ultrasecure+Credit. UltraSecure is the only real identity theft protection plan here, and it’s a better deal than Complete ID.

Not only is it cheaper, it’s better, in just about every conceivable respect, besides the neighborhood watch alerts.

This, really, is where Complete ID falls flat. It’s a middle of the road service with prices rivaling services that are much, much better.

Complete ID simply doesn’t stack up to most other options on the market for identity theft protection. This isn’t just because of its high price point, but because of its performance, which is thoroughly mediocre in most respects.

Identity Force by contrast is exceptional in almost every regard, merely lacking in a bit of customer service availability and a few monitoring tools compared to the top dogs on the market. The choice here is clear, really. There are very few services I’d recommend Costco’s Complete ID identity theft protection over, and Identity Force is not one of them.