Aura vs IDShield – Which One Is The Right Choice?

When it comes to identity theft protection services, there are essentially two kinds: high profile, and budget services. The latter is not anywhere near a pejorative, as many of these budget services can be very good.

IDShield is one such example. It’s a smaller, much cheaper than average service that nevertheless provides top notch performance.

However, what IDShield is up against today is definitely a high profile service, and probably the best identity theft protection service on the market. Let’s see how it compares, and whether it still might be an excellent service for some people to try out. 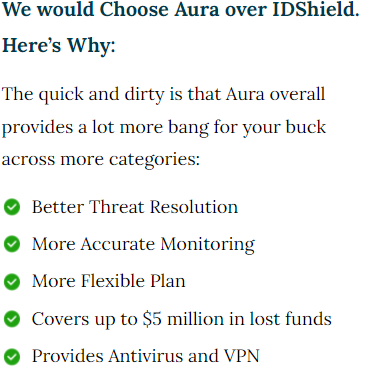 This is a matter of quantity plus quality being simply better than quality alone.

IDShield is actually an excellent service when it comes to monitoring. Its alerts are lightning fast, populating lists within minutes to seconds after something happens, and the alerts are quite detailed as well.

However, Aura matches it in terms of accuracy, and isn’t too much slower in the grand scheme (it takes about an hour to populate the list; well within an acceptable time range), but it has a wider monitoring breadth than IDShield, which goes for the most important and relevant to everyone types of monitoring.

Which is an impressive array. But Aura augments this with home title monitoring (which is absolutely critical for any home owners out there), as well as 401(k) and investment monitoring, which is likewise important for many people.

The greater breadth combined with similar levels of performance means Aura takes it, though I do want to reiterate that IDShield’s monitoring is great compared to most of the market.

This is an interesting one, as IDShield is one of the few services that offers a nonstandard form of threat resolution.

Most options, including Aura, offer two things: customer support, and wallet restoration, which is a more dedicated customer support line for canceling and re-ordering credit cards and the like if your wallet is lost or stolen.

IDShield by contrast has very limited hours. They’re open for standard use between 7 AM and 7 PM, though they do have 24/7 emergency support. However, calling this crew will generally result in them being unable to help you with most things, as they’re a skeleton crew without access to all the tools available during normal hours.

However, IDShield does have a nice side benefit: in-house private investigators that all customers have access to.

This is very close to a tie here, as that benefit is pretty huge for most customers. However, I give the edge to Aura because in roughly 90% of circumstances, having 24/7 customer support and knowledgeable representatives is going to matter more for the average user, and Aura’s insurance would pay for private investigations needed from third party investigators in any case.

IDShield loses in part because the site is a bit obtuse about the exact benefits of its insurance. It’s clear that you get $1 million in coverage from their plan, but even for an existing customer finding the exact details and limitations of coverage is extremely difficult.

Aura is much more straightforward and up front, offering $1 million in coverage for lost funds reimbursement, and a separate $1 million pool for expenses.

Additionally, Aura offers up to $5 million in lost funds for each adult covered by their “Executive” insurance plan, available with all Ultra plans.

There’s no contest here, in other words.

Ease of Use: Winner – IDShield

IDShield has a pretty decent site layout, as opposed to Aura’s which just kind of annoys me more than anything.

IDShield’s site is a little bit clunky, but overall competent. Everything you’d really need access to is on the main dashboard page, except for, weirdly, the alerts, which you have to click to later. That’s mainly what makes me dock it points, as in some areas IDShield’s website is a little bit inconvenient to use. Still, it’s overall solid and definitely better than Aura’s site.

At first glance it’s a fine website, but a closer look reveals its faults. There are seven buttons on this page: five of them are mostly worthless. I say mostly because it is stuff you’ll likely want to mash at least once, just to make sure the option is activated or downloaded. After that though…you’ll never need to look at them again. And they’re just there forever now.

The only things that really belong here are your credit score and “watchlist info”. Arguably, the financial accounts monitoring page belongs here as well, but even if we give it that, there are still four mostly pointless options here.

I’m also not a huge fan that the alerts are in the top right corner with all the other notifications. This is a more minor nitpick, since at least they’re still noticeable, but I’d prefer a layout more similar to Identity Guard, Aura’s predecessor.

Aura has a bit of a side focus on additional services, as lackluster as the offerings are. With Aura you get an antivirus program (which is decent, especially since you get it for free) and a “WiFi protection” service which acts as an extraordinarily limited VPN service; it’s really just an IP masking tool.

This is, however, better than most services, including IDShield which offers…nothing, really, in this slot.

This is a matter of one service offering more value, not necessarily a matter of raw price. Aura definitely costs more, at least for its Ultra plan, which is the only one I’d recommend. Even its Total plan is more expensive, as you can see in this price comparison:

If you were going for Aura’s Total plan, IDShield would be the clearly better value, as its one bureau credit monitoring plan is equivalent in performance, and a fair bit less expensive.

The first is that Aura’s Ultra plan offers a lot more, well worth the $10 upcharge. However, if that was the only factor I’d still probably give it to IDShield, as it’s a great budget option for anyone who doesn’t need the more advanced monitoring features or higher insurance tiers that Aura offers; IDShield is priced incredibly well for what it offers.

No, the main thing that sets Aura well above IDShield is its family plan pricing. Primarily, IDShield does not offer a true “family plan”; it essentially just gives a mere $1 off per plan for bundling them together. Technically that’s a bit of extra value, but it’s largely irrelevant.

Even if it had standard pricing though (most services offer family plans at about a 50% upcharge; so a “buy one, get one half off” kind of deal), Aura would be miles better.

Aura’s family plan is at most $6 extra per month. This would already be an amazing deal if you simply got an extra adult plan, and maybe up to 5 children (as is the standard).

Instead, Aura has hands down the most flexible family plan deal on the market, and it’s not even close. Aura’s family plans cover 10 individuals. That is, adults and children in any combination. Adults can live in different households and everything, though there is a stipulation for children that they have to be under the legal guardianship of the primary account holder.

All of these accounts have separate logins and keep the information on them private from the primary account holder, and are fully featured: including insurance.

It’s impossible for IDShield to compete with that kind of value.

IDShield is one of the best ID protection services out there, and I truly mean that. Despite being swept in every category that matters by Aura, there’s actually still a lot to recommend it over Aura in many ways.

The access to private investigators is great for certain kinds of fraud, and in terms of price it does win in one major way, providing a MUCH better value for an individual account holder who doesn’t need family coverage, and isn’t a homeowner. That is not exactly a niche circumstance, and a lot of people fit that bill and would find IDShield reviews a better value.

But for a lot more people, Aura simply has a wider breadth of monitoring, more features, and a lower price. If you need any kind of family coverage, getting Aura is a much better deal than any alternatives out there.