Identity Guard vs Aura: Which One Should You Get?

Based on my testing, Aura winds hands down. It took everything Identity Guard was good at and improved it some more….

Both Aura & its predecessor Identity Guard are excellent at threat monitoring, resolution, and customer service. However, Aura took the high bar and surpassed it by offering higher theft insurance, white-glove fraud resolution, and added services like VPN and antivirus as standard across all their plans. Not to mention, Aura somehow does this at a better price.

When it comes to identity theft protection, Identity Guard is, or was, the gold standard. However, it seems they felt they could do better. Aura is Identity Guard’s answer to LifeLock.

Instead of just being an identity theft protection service, it offers several other features that help improve your internet hygiene and preemptively protect against online threats.

Let’s see if it works out for them, or if the split in focus results in worse overall performance, the same way it does for LifeLock.

Who Should Get Aura

Who Should Get Identity Guard

As a note: this comparison might seem a bit odd compared to others we’ve done, as I’m treating this as somewhat of a “post-mortem” of Identity Guard. It seems clear that Aura is designed to render Identity Guard obsolete entirely, and it does a pretty effective job of that. See more in our Aura reviews and Identity Guard reviews.

Identity Guard is the gold standard here. Thankfully, Aura is still hard-hitting where it counts.

Not surprising since they are both based on the same technology from Identity Guard.

Within about 30 minutes of putting in the test information, Aura populated a list of alerts. This is actually a bit slower than my experience with Identity Guard, but that could be due to any number of factors, and ultimately isn’t really an issue since the effective difference between 5 minutes and 30, or even an hour, is pretty much inconsequential for alerts like this.

All of the alerts are accurate and give enough detail to do something about it if you click on them. It’s also easy to navigate to the alerts page and get back to where you need to be if you want to view ones you’ve already seen.

Each Aura alert can be expanded for more detail

This is what Identity Guard’s Alerts page looks like:

And, of course, for both Aura and Identity Guard the breadth of monitoring is still there, with all of the features you’d expect:

Aura makes these features standard on all their plans, while these are only included in Identity Guard’s Ultra package. For the record, though much of it, save the home title and 401(k) and investment monitoring are included in the Value and Total packages as well.

I can’t really think of anything Aura could do better, as it’s pretty much a carbon copy of Identity Guard in this regard. And for the record, that’s the highest praise I can give for its monitoring.

As you might expect I don’t have anything to mention about Identity Guard specifically either, since they are exactly the same in both breadth and performance. Aura just gives you more in every plan.

Here we hit the first place where Aura blows Identity Guard out of the water. One of my biggest complaints with Identity Guard was always that they had limited hours for their customer service. They were good hours, running from 8 AM to 11 PM (EST) on weekdays, and 9 AM to 6 PM on Saturdays. However, those hours are limited, and the lack of availability on Sundays could sometimes be a pain.

Aura solves that problem completely, offering 24/7/365 customer support, meaning you can reach them any time of the day or night to get a competent, friendly customer service agent on your case.

I presume, though am not entirely sure, that the same general rule applies for Aura as Identity Guard: they tend to retain their customer support representatives a bit longer than the industry average (about 7 years), so the average level of experience and knowledge is much higher than among competitors.

In addition, they of course offer the same secondary options, like wallet restoration, to help ensure you can quickly and easily cancel and reorder credit cards and whatnot.

I’m very impressed with this upgrade to their customer service.

On the whole, when I called both services, I was connected to a competent person within 1-2 minutes. Very impressive for Aura since I called at midnight on a Saturday.

On the individual plans, the insurance plan is largely identical between these two services. No muss, no fuss, $1 million in insurance for both lost funds and expenses, separately.

However, on the family plan, Aura offers $1M per adult for a total of $5M in theft insurance, blowing Identity Guard and every other company out of the water.

So if you have a Family plan with Aura, both you, your spouse and up to three qualifying adults are covered up to $1M each!

A very nice to have, indeed.

Both services offer the same benefits and terms for Lost Wages, Elder/Spousal/Child Care and Travel Expenses.

Aura, again makes it standard to have White Glove Fraud Resolution on all their plans, while Identity Guard only offers it for the Ultra plan.

Both Aura & Identity Guard’s family plans allow you to include up to 5 adults and unlimited kids. This is extremely generous compared to the 2 adult and 3-4 kids norm in the industry.

Aura’s family plan differs from Identity Guard in the higher theft insurance coverage (up to $5M versus $1M) and the additional services included, which we will discuss in more detail below.

In comparison to Identity Guard, I actually don’t like Aura’s web interface as much. It feels very much form over function and provides a lot less useful information available on its dashboard.

Really the only thing it gives you here is your credit score. You don’t have a quick overview of your alerts or anything like that (though you do get your most recent unviewed notifications in the top right), and the services you have quick access to are not ones that you really need quick access to via your dashboard, and are instead are the kind of thing that could have been shoved to a side menu, because they only really need to be activated once and you’re done with them.

It’s not terrible, but it’s a shame that it’s just…okay, since Identity Guard had pretty much the perfect dashboard, and it was the standard I used to compare other services against.

A quick look at what I mean, for reference:

A cleaner layout, more relevant information, and the features on display on the first page are ones you are more often going to need or want quick access to.

“If it ain’t broke, don’t fix it” applies here in spades. Identity Guard’s dashboard layout was as far from “broke” as you could possibly get, to boot. This is a very sad step back in terms of website layout in my opinion.

There is a wide gulf of difference here between Aura and Identity Guard. Where Identity Guard had pretty much nothing in the realm of additional services, Aura has plenty.

Much like LifeLock, Aura offers a VPN service and antivirus plan bundled into their membership packages. This gives you more general protection than you’d have otherwise, and these are nice services to have for free, essentially.

Aura’s antivirus offering in all plans

I don’t think either service is the best on the market, but having any kind of VPN or antivirus is better than nothing, and having a “free” antivirus is usually good enough to obviate the need to pay for a more expensive one.

In addition, Aura also offers Circle parental controls as part of their Family plan, which I was definitely interested in as a parent.

I like how Aura has really streamlined the pricing here. They offer the same benefits on all plans. What changes is how many members you want to be covered.

As you can probably tell, the prices here are close to identical, except at the Value plan; presumably because of the addition of the VPN and antivirus making it so they have to hike the price of their lowest plan. But otherwise, there’s only the rounding of a cent here to make the biggest difference. Family plans are cheaper for Aura at the Total and Ultra plan levels as well, leaving little reason to go with Identity Guard over Aura.

This, likewise, is probably the intent. Aura seems intended as a complete replacement for Identity Guard in every way, so it’s aggressively priced to make sure it can bring people in.

Oh, and it’s important to note: the Value and Total plans remain a less than ideal value for most users, though the Value plan is an interesting one for Aura since you at least get the VPN and antivirus along with the subpar monitoring.

Finally, an extra bit of temptation to use Aura comes in the fact that Aura has a 2 week free trial, and a 60-day money-back guarantee if you don’t like it. Only 2 weeks on the trial is a bit stingy compared to other services out there, but it’s a lot better than nothing.

The two services, unsurprisingly, compare very well to each other. Equally unsurprisingly, Aura wins out in every category except ease of use. I’m honestly kind of surprised that they haven’t phased out Identity Guard entirely, and given existing customers a free upgrade or something, because that’s essentially what Aura is: an upgrade over Identity Guard. It has the same great monitoring, more features, more breadth in the insurance, and a similar (and in some places cheaper!) pricing structure.

There’s really no reason to stick with Identity Guard over Aura, and that’s impressive. Identity Guard was already my favorite identity theft protection service, so having something out there that is just “Identity Guard, but better” is very nice. 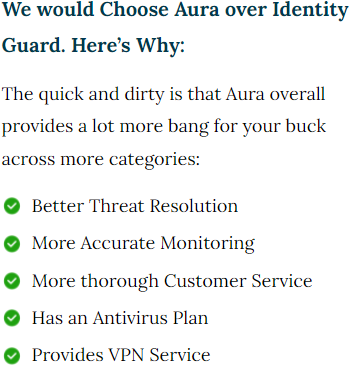