This is one of the more lopsided matchups I’ve looked at in a while. Being perfectly honest with you, this is a comparison between what is hands down the best identity theft protection service on the market right now (Aura), and a service that underperforms in nearly every category compared to almost every other service I’ve reviewed; it’s the third worst in my opinion out of everything on the market I’ve looked at.

So this is less a question of “which is better?” (the answer is Aura) and more “why is Aura so much better?”. 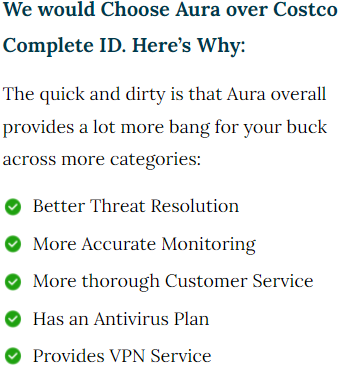 Costco Complete ID is one of the most bizarre services on the market when it comes to marketing, as it takes a very strange “quality over quantity” approach. It offers very little in terms of monitoring breadth, barely covering the basics, and arguably not even that.

The last being what is usually referred to as sex offender and criminal registry monitoring, that notifies you of known criminals in your area and their details.

The level of detail on each of these, especially the neighborhood watch alerts, is staggering, far more on the latter than anything else I’ve looked at.

However, it fails to cover some very important bases you want your identity theft protection service to be monitoring. In addition to everything above, Aura offers:

These may seem like minor features at first glance, but they’re all very important, with home title monitoring being the most deceptively critical of them all. While only offered by their top tier service plan, that one especially is something every homeowner needs, as home title fraud is actually one of the most common and unsurprisingly most devastating types of identity fraud, as it can leave you homeless, in massive debt…or both.

Combined with Aura’s superior speed and accuracy, and you just have a service that provides more bang for your buck where it counts.

Both offer essentially the same service here: 24/7 access to their customer service teams.

I could give an edge to Aura, for having on average more experienced customer service representatives (as each stays on staff for about 7 years on average), but I’ve had no particular issues with either option.

When it comes to insurance, more is, in fact, more.

Costco’s insurance plan isn’t bad, actually, offering up to $1 million in expenses and lost funds reimbursement (referred to by them as cash recovery, unlike every alternatives to Aura ID theft protection on the market). However, like many smaller services, Costco rolls this into one big pool. You only get up to $1 million in coverage for expenses and lost funds combined.

Meanwhile, Identity Guard provides $1 million in coverage for each to every one of their service tiers. Additionally, those who buy the Ultra plan become “Executive” members and gain access to a pool of $5 million in lost funds reimbursement (not expenses) that applies to every adult on a  family plan.

That is, simply put, a lot more than what Costco provides.

Ease of Use: Winner – Aura

Aura takes a slight edge here, but both services are very middling on the ease of use front.

Aura’s primary sin is that a lot of its dashboard is just entirely wasted.

Of the seven options on this front page, only two of them serve any urgent purpose. The rest are things you’ll activate once and then probably never need to touch again. I’m also not a fan of how alerts get mixed in with other notifications up in the top right corner of the screen, though that’s a smaller gripe.

Costco Complete ID is marginally worse, and in a more annoying way.

I just hate how it’s laid out, in one long page you have to scroll up and down constantly to find anything, instead of having a sensible tab-based layout. Even worse, there’s all this blank space on the side that could have been used to at least double up columns and make it easier to navigate…but no, everything is in one cumbersome, annoying column that makes it a pain to find any specific thing if you’re in a hurry.

Neither is great, but Aura is better where it counts. You can at least find everything you need pretty easily.

Aura provides additional services, and Costco doesn’t, so it wins by default. Sort of.

Costco has its own weirdness which we’ll talk about in detail when we discuss price, but suffice to say that as an identity theft protection service alone, Costco offers nothing besides the basic service, but Aura gives you a VPN and antivirus service on top of their already more robust protection package.

While neither is great, they’re a whole lot better than nothing, and could save you some money (especially the antivirus).

This is absolutely no contest.

Costco Complete ID has a pricing structure I can only describe as “wacky”, and it’s the main thing that prevents me from recommending it as a small, budget option compared to other services.

Take a look at this:

Now, that seems awfully reasonable, doesn’t it? A very low price for what you get, and it would be one of the most budget friendly identity theft protection services on the market…if these prices weren’t so deceptive.

You see, Costco Complete ID is only available to existing Costco members. This means you’re paying an additional $60 per year (for Business and Gold Star members) or $120 a year (for Executive members), which brings that pricing in line to the exact same number: $227.88 per year.

Now, this does come with all of the usual benefits of a Costco membership, so it’s not a complete waste, but it doesn’t really factor into taking the service itself at its own value.

Complete ID also does not have proper family plans; to cover another adult you’ll need to shell out the full monthly price again.

So in the grand scheme of things, assuming you use our affiliate code for access to the above prices, even Aura’s Ultra membership doesn’t cost much more. It’s also significantly better in every conceivable regard and, here’s the kicker, has one of the best family plans on the market.

As you can see, Aura’s family plan costs an additional $6 extra over the individual plan.

For that $6, you can have up to 10 more accounts, in any combination of adults and children. Yes, that does mean you can have 10 adult plans for the average cost of $3 per month split between you. You could alternatively have fewer adults and more children (so long as they are under the legal guardianship of the primary account holder) as well, but even then it’s still a great value.

It’s pretty much impossible to compete with that, and Costco’s Complete ID service doesn’t even come close.

As I said at the start of this, this is essentially a comparison between the best service on the market and one of the worst. Costco Complete ID has some merits, and if you’re already a Costco member might very well be worth checking out, but the fact of the matter is that even compared to other budget options it’s not really that much less expensive, and it’s overall lack of performance makes it hard to recommend.

Even compared to Aura specifically, Aura’s bottom tier Value plan, which normally I would say is a poor value compared to the Ultra plan, performs better at a much lower price than Costco Complete ID even if you do have a Costco membership already.There is really no reason to take Complete ID over Aura, and quite frankly there is very little reason to take Costco Complete ID over almost any other service on the market right now, unless you can get it on one of its very rare discounts, while you’re already paying for a Costco membership.

It’s just too niche of a circumstance under which to recommend the service, to really entertain as a true possibility.