Experian’s IdentityWorks service is one we haven’t looked at in a long time. At one point, I thought it was one of the worst services on the market, for several reasons. However, certain especially bad services have redefined what a bad service can really be like.

Let’s see if that new perspective changes my overall opinions on the identity theft protection power of Experian IdentityWorks, or if it falls as short as I expect it will.

We use a simple process that focuses on achieving repeatable, relatable results. Thoroughness is the key when looking at an identity theft protection service, analyzing its performance in every major category of use.

Primarily, we look at six things:

Each service is given a score in every one of these categories, and then a final aggregate score is derived from these results. However, these results are heavily weighted, with the most important categories being listed first. The bulk of the score (about 70% of it) is derived from the top two categories combined, while everything else serves to determine how well-rounded a service is and defines options that can count as a tiebreaker in the case of services with similar core performance.

So, while a service can still maintain a high score even if they receive a poor grade in some, or even all of the bottom categories, failing in the realms of threat resolution or especially monitoring tools instantly earns a low grade. 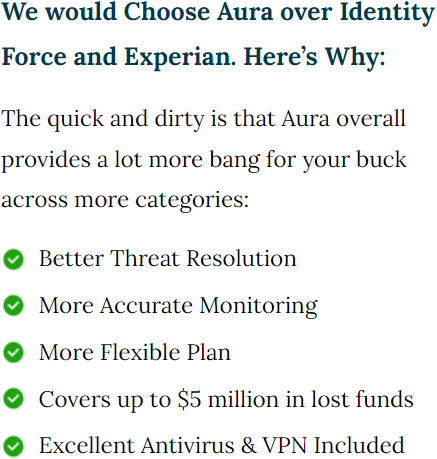 Identity theft is roughly as necessary as home security or insurance. Can you go without it? Absolutely. Is it possible to get lucky and never need it? Yes.

But if you do become the victim of identity fraud, much like with insurance and physical theft, you’re going to end up paying a lot more to fix the problem than if you’d taken those preemptive measures.

Identity theft protection also has the notable distinction of being a lot cheaper than other security options, especially if you just want the insurance coverage.

The more you use the internet, the more important this coverage is going to be, and the less reason you have to not pull the trigger on buying some kind of identity theft protection, even if it’s just the most affordable service you can find.

Ease of Use: Winner Identity Force

In a lot of ways, Identity Force’s website layout and dashboard is nothing to write home about. It’s pretty standard stuff.

Part of the issue is it has a lot of wasted space because of the news sidebar taking up a lot of the page, when you could instead have quick jumps to some of the more commonly used features. Also, the left side navigation bar feels a bit weird to use and requires a bit of a learning curve to figure out what goes where.

But all things considered, it’s not that bad. You do get your alerts front and center (which is a big plus), and I don’t have anything especially scathing to say about it. Nor does anything especially good come to mind. It’s the definition of middle of the road.

Experian’s site, on the other hand, is a bit of a mess.

It’s far, far from the worst I’ve seen to be fair. But the page gives you a big hint about what the primary problem with IdentityWorks is: it’s too focused on credit monitoring. Pretty much everything on this dashboard is credit related.

That is not what you want to see from an identity theft protection service: which is what this is, not a credit monitoring service.

It compounds this by making its dropdown pages a real pain to navigate, as they’re the old-school kind that can’t be fixed in place for easier navigation. If you like having your finger slip a millimeter and close the whole drop down, this might be the dashboard for you, but I’m betting that’s a minority preference.

Identity Force has some of the most competent monitoring and alerts out there. It’s blazing fast, and offers a wide variety of monitoring tools that are only exceeded by the biggest, most expensive services out there. These include:

This covers the majority of common circumstances when it comes to identity theft protection, and it finds potential alerts quickly, giving a lot of detail about the detected threat in the process.

Experian’s IdentityWorks service has the same functionality on paper, but drops the ball in practice. It missed several alerts I expected to see during testing, though it did throw a curveball in detecting something most other services didn’t (a compromised phone number). Still, getting one lucky strike in a field of misses is not what we’re looking for here, and I’m willing to write it off as a fluke.

It’s also worth mentioning that IdentityWorks is very, very slow. It took the whole month of testing to even get the few alerts it populated: much slower than the mere minutes Identity Force took to find the same results.

This is way too slow to justify recommending it for its monitoring power.

Identity Force offers competent, though not top of the line customer support. Identity Force is open 7 days a week, but has limited business hours. They’re only open between 8 AM and 5:30 PM (EST), which can make them a bit annoying to get a hold of during the work week, as for most people you’d have to take time off or call them on your lunch break to get something figured out.

Still, it works fine and their customer service is friendly and knowledgeable…though unfortunately less of the former when it comes to canceling your service. Their team seems to be trained to almost bully you into not canceling the service, and need to be told firmly to knock it off and proceed with the cancellation. Likewise, they need to be very firmly told to stop calling you to get you to subscribe again, and can be obnoxious to deal with in those scenarios.

This is still, however, miles better than Experian IdentityWorks. Experian customer service is notoriously bad. Not because their representatives are unfriendly or unhelpful…but because it is an almost herculean labor to actually get them on the line in the first place.

Even finding their phone number on the website is annoying, and best done through a Google search.

Nominally, they are open every day, except Sunday, from 7 AM to 8 PM. These are great hours, on paper.

Actually getting past the machine to speak to a representative is nearly impossible.

Much of the time you do get past the machine, the representatives are unable to help you.

You will spend hours on hold.

You will not get anything done.

Forget about canceling this service through normal means. It is genuinely easier and faster to cancel your credit card and report the charges as malicious, because by the time I did so I was genuinely convinced that signing up for this service was worse than actually getting my identity stolen.

On the bright side, IdentityWorks does have some of the most impressive credit monitoring tools out there, so it’s got that going for it.

They offer a variety of options and services that are aimed at reducing your debt and increasing your credit. These include bill negotiator services, step by step instructions on how to apply stuff like paid bills (car, rent, utilities, etc.) to your credit report for a trustworthiness boost, and so on.

These are genuinely great services tacked on to a pretty subpar service, sadly.

Identity Force…doesn’t offer much of anything worth discussing in comparison.

Experian offers $1 million in insurance, flat; everything is compiled into the same pool. They’re also a bit stingier on expense limits than similar insurance types. For example, they only cover $1500 per week for lost wages as opposed to most services offering $2000 per week over the same total time period.

Identity Force offers both separate $1 million pools (one for expenses, one for stolen funds), and more generous reimbursement limits.

So, this is no contest for Identity Force.

As far as price goes, Experian’s IdentityWorks service is not bad, actually.

This is far from the best price spread I’ve seen, but on paper it’s quite good compared to what it promises. Unfortunately it delivers on very few of those promises, but in a vacuum it’s a good price.

However, it still pales in comparison to how ridiculously affordable Identity Force is.

On paper, again, this looks like a worse deal. However, if you take the “UltraSecure+Credit” plan off the table, it’s much better.

You see, the addition of credit monitoring does not, in my opinion, appreciably increase the value of Identity Force’s service. You can get credit monitoring for free from sites like Credit Karma. This is, in part, what makes IdentityWorks having such a huge focus on credit so baffling, because it’s something you can get just as competently for free.

Setting that aside, Identity Force’s UltraSecure plan is similar in what it offers compared to Experian’s Premium plan…but in practice also offers better, more complete performance.

So you get better performance for about $2 cheaper per month. Not a bad deal.

In theory Experian would be better for family coverage, since it has pretty good deals on its family plans…but it simply doesn’t deliver enough value to justify doing that.

It had been so long since I looked at Experian’s IdentityWorks service that, if anything, I’d forgotten how bad it is. While there are certainly worse services out there in terms of monitoring, who offer less in additional services, and even offer inferior insurance…Experian is still the most infuriating service I’ve ever had the misfortune of reviewing.

Identity Force, by contrast, is one of the strongest services on the market. I have my gripes with them, but those annoyances are outweighed by an appreciation for the core performance of the service. IdentityWorks fails to even have that much going for it, and as a whole, the service could be safely labeled as incompetent.

Nothing about it works as it should, and IdentityWorks is conceptually flawed from the start: an identity theft protection service that minimizes focus on identity theft of all things, to increase the scope of its credit monitoring and repair tools. What an absolutely bizarre approach.

This is the Service we Trust & Use for our Online Security