Identity IQ is a service I had high hopes for. At a glance, it reminded me a lot of some of the best options out there. It has a similar multi-tiered service plan to many of the big names, a lot of features on offer, and an overall professional look to it.

So, in essence, it’s a very good example of how looks can be deceiving.

Compared to Identity Guard, Identity IQ doesn’t hold a candle. This in itself is not unusual, as Identity Guard is close to the top of the market when it comes to performance. But Identity IQ compares poorly to just about everything else out there, for reasons we’ll get into soon.

For most people it’s going to be Aura. 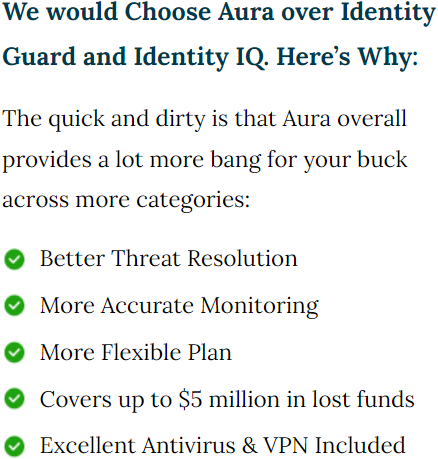 Identity IQ is terrible, let’s get that out of the way immediately. On only one other occasion have I encountered an identity theft protection service with monitoring that simply appears to…not work, at all.

You might notice that there are no alerts here. That in itself might not be unusual if I didn’t know that there should be somewhere between 5 and 10 different alerts that our test information has seeded into it. This ranged from a few data leaks on usernames for various websites, to a spoofed phone number.

Usually I’m a bit forgiving of services that miss or downplay some of these lesser alerts, as long as it catches at least some of them.

But to throw up nothing? That’s ridiculous.

So, Identity Guard wins by default. Identity IQ gets a failing grade in this category, and as a service.

But for posterity, Identity Guard has monitoring that’s more than good enough to win regardless in most circumstances. It offers these kinds of monitoring:

And, even better, it actually works! Identity Guard’s monitoring is fast, accurate, and detailed.

Even if Identity IQ’s monitoring worked, it would still lose. The monitoring is laughably limited, even at the highest tier service plan. It basically only offers dark web monitoring and a smattering of other minor monitoring tools.

Identity IQ is a disgrace in every regard when it comes to monitoring.

The backbone of any threat resolution service is its customer support, and hours are a big part of that.

Neither of these services offers 24/7 customer service, which is a shame, because rapid response to an alert is one of the most important things when it comes to resolving an identity fraud event.

Identity Guard’s hours run from 8 AM to 11 PM (EST) every weekday, and 9 AM to 6 PM on Saturdays; they’re completely closed on Sundays.

Weekend availability is largely the same, but Identity Guard has a much larger window here during the weekdays, which makes it easier to deal with issues.

Both also offer “lost wallet” services that help you cancel and reorder credit cards and the like if your wallet is lost or stolen.

This is, of course, ignoring the fact that Identity IQ’s threat monitoring services are utterly worthless because their monitoring doesn’t work. Consider this a score a matter of their threat resolution being good in theory.

Identity IQ’s insurance isn’t terrible, but it’s subpar compared to market leaders. Identity IQ covers up to $1 million in stolen funds and other expenses,  all rolled into the same pool.

By contrast, Identity Guard offers separate $1 million pools for expenses and lost funds, potentially covering up to $2 million if your losses are especially heavy.

This is a much better arrangement, as you get more bang for your buck overall.

Identity IQ’s website isn’t too bad, overall, but it definitely stumbles in some areas.

At first blush, everything is fine. There’s a ton of information on the front page, and it’s easily digestible.

But digging deeper, everything just feels kind of clunky and awkward to move around. Alerts are separated onto multiple separate pages, which is good on paper but just makes it annoying to use in minor ways.

Simple squares, everything is visible without scrolling, and navigation is a snap. Almost everything you might need quick access to is right here on the front page, and the alerts are front and center, so you can easily hop over there and view more detail later.

Identity IQ offers an antivirus and VPN service as an addon to all of their service tiers, giving them a leg up over Identity Guard here, as Identity Guard doesn’t offer much of anything at all for additional services.

Their risk management score system is interesting, but arguably is a part of the core experience, and isn’t exceptionally detailed in any case.

Identity IQ’s antivirus and VPN service is mediocre, but decent enough for the relatively low asking price for the addon.

The insult that Identity IQ adds to the injury of its utterly abysmal monitoring is that they charge you an arm and a leg for a service that ultimately does nothing. Let’s take a look at what they’re charging:

Identity IQ also offers their “Bitdefender Total Security” plan for an additional $2 per month for every plan…except the Max plan, which naturally costs $3 for no apparent reason. They do not offer a specific family plan, though every plan does come with child protection, with monitoring and up to $25, 000 in insurance.

And, for comparison, Identity Guard:

As you can see, Identity Guard is significantly cheaper at every tier, and especially so on a yearly basis. Identity IQ, strangely, does not offer any sort of discount on their yearly membership. This is usually the only incentive to ever chain yourself to a service for a full year in advance, and as a result I would recommend never getting Identity IQ’s yearly plan.

Though, that does bring us to my final point.

Identity Guard obviously wins this race, in part because it’s one of the best identity theft protection services out there, and few are able to match or exceed its level of performance.

However, Identity Guard could be one of the worst options out there, and it would still win regardless. Because Identity IQ is beyond terrible.

There is no excuse for a monitoring service whose monitoring does not work. Nothing else about it could make up for that.

It’s especially shameful the state this service is in given its absolutely ludicrous pricing scheme. The asking price for this service would be high for one of the best services out there, exceeding relatively expensive services like LifeLock.

However, those services have the performance to back up their higher price point.

Identity IQ does not. It would be a pretty bad deal at the low, low price of “free”, though at least you’d have the insurance in that case. But these exorbitant prices for something that can’t even meet the bare minimum of expectations for what a service like this should be able to accomplish? Unacceptable.

Stay far away from Identity IQ. Just about anything else out there is a better choice, as almost every other service I’ve reviewed, with one exception, has had at least minimally competent monitoring.